Due for Completion Spring/Summer 2017

To redesign the areas immediately around the house at Boscrowan Farm, a 17 acre plot in Heamoor Penzance, in Cornwall.

A recent visit to Hidcote Garden, and Kiftsgate garden nearby, in the North Cotswolds  was  inspiration for the layouts and planting of these spaces.

The new layout for Elizabeth’s garden, includes a wide walk that separates the herbaceous and mixed shrub borders. It runs away from the house, with a bench at one end near the house, and a round end at the other to take a large urn or a sculpture or some such. The proposals incorporate steel arches along this walk, not only to frame the space, but also to act as supports for annual climbers and/or roses. It is also wide enough to accommodate large planters along its length, without blocking the vista, or any access.

The planting in the  herbaceous bed will include

The mixed border will include

The Dry garden is a gravel garden with a large round pool in its centre. 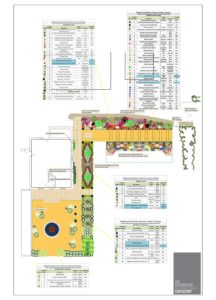